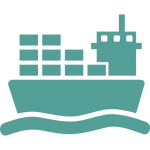 Maritime transport is the main means used in international trade and IGL offers you all the door to door services, both LCL and FCL, adapting the type of container to your needs in the best conditions, because to the agreements that we have with major shipping companies. Not all loads have the same needs, there is a wide range of services for each cargo that is transported from origin to destination with maximum guarantees. Dry Van containers, High Cube, Open Top, Pallet Wide … In IGL know all the types of service, we can advise you.

Full Container Load. IGL offers this service door to door, facilitating the entire process of the logistics chain for both the exporter and the importer

Less than Container Load. If you don´t need a full container, IGL offers a service consolidation with other cargos, for transport to remain competitive

Allows shipments of all types of rolled cargo. Indicated for all those loads that due to their characteristics can not be containerized

If you need to send refrigerated products, transport is carried out in refrigerated containers, which keeps the cold chain and preserve the product

IGL offers flexible tanks for transporting bulk liquid. Being single-use ensure that your goods will not mix with products previously loaded

Containers used for transporting solid bulk cargos. Its uniqueness is that facilitates both uploading and downloading via ad-hoc openings
CONTAINER MEASURES

Relevant parts of both SOLAS and MARPOL have been worked out in great detail and are included in the International Maritime Dangerous Goods (IMDG) Code, thus making this Code the legal instrument for maritime transport of dangerous goods and marine pollutants. As of 1st January 2004, the IMDG Code will become a mandatory requirement.

Depending on the risk of mass explosion or fire causing projection

Consists of explosives that have a projection hazard but not a mass explosion hazard.

Consists of explosives that have a fire hazard and either a minor blast hazard or a minor projection hazard or, both but not a mass explosion hazard.

Consists of explosives that present a minor explosion hazard. The explosive effects are largely confined to the package and no projection of fragments of appreciable size or range is to be expected. An external fire must not cause virtually instantaneous explosion of almost the entire contents of the package.

Consists of very insensitive explosives. This division is comprised of substances which have a mass explosion hazard but are so insensitive that there is very little probability of initiation or of transition from burning to detonation under normal conditions of transport

Flammable gases. They can be ignited by a heat source. Eg. Propylene, ethane or butane.

Toxic gases. Inhalation may cause acute effects or even death. They may be flammable, corrosive or oxidizing. Eg. Chlorine

Flammable solids, self-reactive or explosive desensitized. These can react spontaneously.

Spontaneously flammable substances. They may ignite spontaneously when heated, when in contact with air or while being transported.

Oxidizing. Liquids or solids that support combustion, can favor the development of fires.

Organic peroxides. They derived from hydrogen peroxide. You can only be loaded into a loading unit in certain quantities. .

Toxic substances. They can cause death by inhalation, skin absorption or ingestion. Eg. Methanol or methylene chloride.

For packages with a maximum radiation level at the surface of 0.5 millirem / h or containers that do not contain packages with higher categories.

For packages with a radiation level in the largest area to 0.5 millirem / h, not to exceed 50 millirem / h.

For packages with a maximum surface radiation level at 200 millirem / h, or for containers whose transport index is less than or equal to 1.0 and carrying bundles visible category III.

A material which presents a hazard during transportation but which does not meet the definition of any other hazard class.

Ask us for a quote